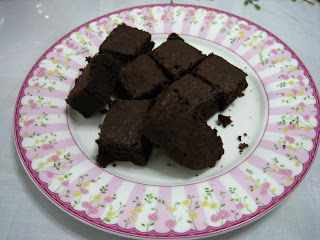 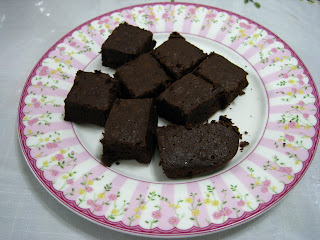 Who could have resist these dense and dark temptations 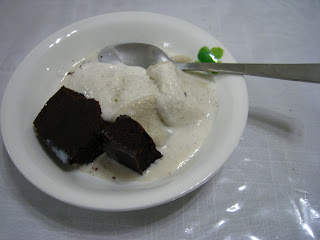 Choc Fudge brownies with Italian Vanilla Gelato
Brownies...Who would resist them? Brownies are actually a cross breed between cakes and biscuits. They are not cakey like cakes and not as crunchy as biscuits. As a matter of fact, they are simple baking invention which would not go wrong as long as you have the correct recipe and methods in hand. I've done a little bit of homework on brownies- and it appeared that these sinful creation was created in 1893, by a chef in Palmer House Hotel Chicago, USA- it was a request from an American socialite Bertha Palmer (yes, she is the wife to the owner of the hotel).
Yes, back to the story of brownies- I first baked brownies when I was a 16 year old school girl. I had baked brownies with my eldest sister, out of curiosity. It was a recipe from a Malay magazine back then. Oh my, it was awful- something was not even right with the recipe, it was so sweet and we couldn't even take another slice. Those brownies were straight away given to our opposite -door neighbour. So, that was the last time I had baked brownies. Then, I have discovered that home- grown bakery cum restaurant - Secret Recipe, have their own versions of brownies. But somehow rather, I was not tempted.... Then, as fate intervened- I have ordered brownies for a meeting from my friend, Erna Malia of (http://piece-of-cake-desserts.blogspot.com/). Oh gosh, her brownies were complete heaven. I couldn't even have the last piece to bring back. They were gone....right in the meeting. So, I was inspired by brownies again. Then one fine day, I have discovered a brownie recipe, from a foreign magazine. I instantly bought that magazine. I kept promising myself to bake brownies again, telling myself this time it is going to be all right. And guess what, it turned out to be a sold-out among friends and yours truly. As I cut the brownies into pieces, I kept popping them in my mouth and only brought 3/4 of the tray to work. Apparently, friends kept asking for the recipe- and here I am, sharing the recipe as I have repeatedly baked these choc fudge brownies. Every time, I brought them -brownies- to work place, friends kept asking for more brownies and its recipe. So, now goes the recipe....
Ingredients
3/4 cup butter, unsalted please (if you may have them)
4 oz unsweetened choc, chopped, ( I have used hershey's bar)
4 oz semisweet choc, chopped
* You can use bitter sweet choc to replace the unsweetened choc- it turned out to be nicer -from my experiment...
* You can also put 1/2 cup of unsweetened choc powder for the unsweetened choc (if any)
1/2 cup plain flour
1/2 cup unsweetened cocoa powder ( I have used Bournville's Cadbury's Cocoa)
1/2 tsp salt
6 eggs (large)
1/2 cup caster sugar
1 1/2 cup soft brown sugar
2 tsp of vanilla extract
How
1) Preheat oven to 150C. Line baking tray, grease it with butter. Baking tray -it should be square and not that deep- or you can just leave out the parchment paper and just grease it with butter...
2) In a saucepan, melt butter and chocs - low heat. Stir using wooden spoon. Remove from heat.
3) Using mixer, beat eggs until blended. Add sugar -bit by bit, beat 10 minutes or until tripled in volume.
4) Sift flour, cocoa powder and salt.
5) In the egg and sugar mixture, fold in melted chocs and vanilla. Fold in flour mixture. Pour into pan. Bake 28 to 32 mins. You can test if it is ready by inserting a skewer in the middle, if the skewer comes out clean, your brownies are ready. Cool and cut into pieces.
Happy Friday, everyone...
p/s: Eat them with Italian gelato and you'll fly to the moon.... ;)
Posted by nizaineese at 5:34 AM 10 comments:

I Miss This Place 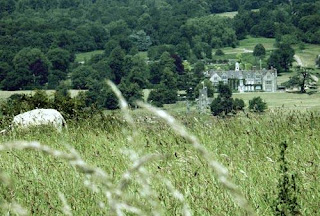 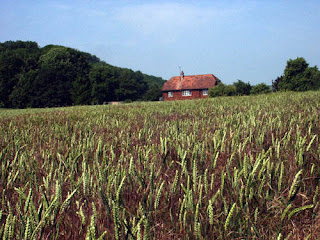 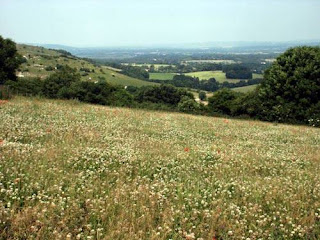 A countryside landscape in West Sussex.
All pictures -credits to Ferne Arfin
From http://www.gouk.about.com/
I miss this place very much.. Those picturesque countrysides of West Sussex, England. Often that I've been wondering to myself- whether I would have the chance to spend another few years of my life again in this place. This place had seen me growing from a clueless teenager in the brisk of adulthood to a young lady of 20's. I even celebrated my key to adulthood (of 21 year old) in this place. I do not miss London, the city where everyone has been dreaming of . I miss this part of countryside, seeing the beautiful houses in vast farms or wild rabbits hopping around the fields. I might even consider myself a country bum. Oh, I miss this place very much as it has helped me to become ME.....But sometimes, we could only dream as work and family commitments do not permit us to visit the place which we have fond memories... Thank You, West Sussex for being You.
Posted by nizaineese at 12:44 AM 4 comments:

The Hummingbird Is Flying High .... 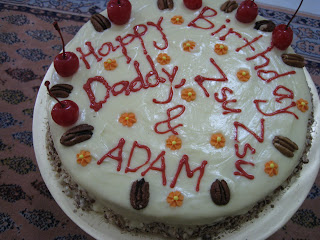 The Hummingbird frosted with Philly's cream cheese with a dash of vanilla beans, topped with roasted pecans, maraschino cherries and orange sugar flowers.. 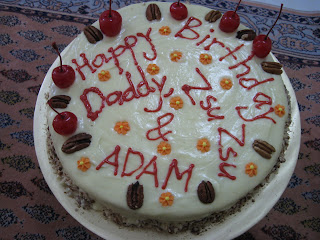 This birthday cake is for the three special people in my friend's life,
Nurul Izwarina- her husband, sister and son.

The Hummingbird is flying high. Even higher than before. A day before Chinese New Year, my friend- Ms Nurul Izwarina was having a kind of birthday party for some VIPs in her life, and she has requested for the Hummingbird. And I was more than happy to bake for her - yes, I loved baking this particular cake. It's my favourite- as I've said earlier, this is just a humble cake, not snotty.. but humble. This time I've added more roasted pecans and used vanilla beans in the batter and frosting. Vanilla beans are indeed a luxury, but I just couldn't use the usual vanilla essence, as I was trying to be extravanganza in this particular cake. I have used all extra ingredients. More pecans, chopped bananas and extra crushed pineapple. The results were fantastic, based on the delicious batter and frosting. Since I had to squeeze all the names on the cake, I've decided to put less cherries and going on the cute outlook. Apparently, I ran out of my writing icing, hence the squeezing of the few drops of icing. Since I have baked this with love, I hoped my friend would be happy with the cake. As the saying goes, " a happy baker makes a happy cake ". Yes, the hummingbird is here to stay. For a long period of time..... Happy Sunday, every one.

Posted by nizaineese at 4:57 AM No comments:

Another Hummingbird For Another Friend 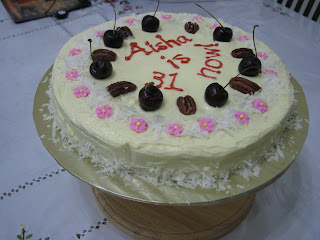 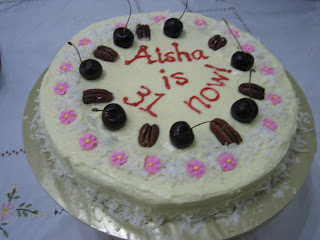 The girl is officially 31 now. 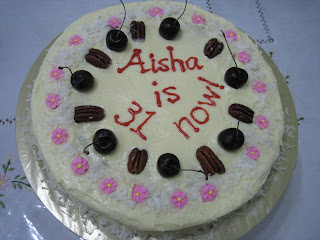 It's my favourite cake, too.
The Hummingbird is a humble cake. I say it is humble because nobody would have imagine the taste of this cake. They cannot even guess the ingredients, but simply saying that the cake has made them want more and more. For your information, I have made this cake using chopped bananas, a handful of walnuts and pecans, freshly grated coconut and chopped pineapple. Some of my friends were unaware of those ingredients. They cannot even think of what they have eaten, this cake is simply "different".
My love affair with this cake has started in 2008. I first baked this cake out of curiousity. It was 2009 and I had presented it to a dear friend for her delivery. Her children liked it very much. Then, I stopped. Then, at the end of last year, I had baked it again for my friend's birthday. Elly, my friend liked it very much. What a pomp to go for this humble cake. The rest as we say, is history. The hummingbird is now no longer a humble cake. It has emerged as an "eagle".
The story behind those pictures- I have baked this cake for a friend. Complimentary of me. As usual, friends are always asking for red velvet, but since it is FOC, I 've got the final say.(heehe). I told my friend, Aisha, I would bake her a different cake, as I thought that red velvet is too popular now. I have always liked to bake something that is not too cliche. In short, I want to be different. Verdict- Colleagues are raving about this cake, they thought that it was so nice and different. Well, I told them, " It's my favourite too" and smile.....

Posted by nizaineese at 4:54 AM No comments: 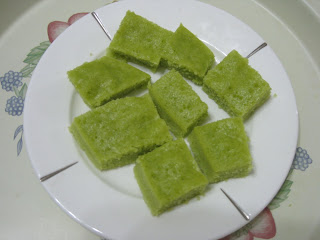 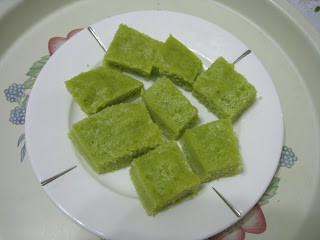 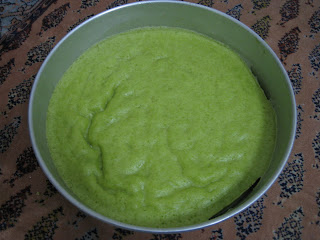 Piping hot from the steamer

I loved this cake. I would fall in love with it all over, again and again. It is just like you meet this person, and simply loved him for every single thing that he does...and loved him again and again through out your whole life...every time you have this opportunity to encounter him.....hmmm.;) There's a story on the existence of this cake, SIL had asked me to buy some Malay kueh or "desserts" at the market, but I did not I have the time to go out. I ran out of time. So, I decided to make another type of "kueh". Something that would not make people feel they have enough. Something that made people want another slice after having one. Yes, this is the one. Apparently, I have made this cake for a "kenduri" (a family gathering) in my MIL's house. Instead of baking, the recipe called for steaming. So, I steamed the cake as required. It took me a good half an hour to do it. Verdict- a total delight, something that cannot make you stop. You need another second helping and you can't just say no. The texture- it is dense and fluffy, yet very light. You can never be bored with this type of cake. I have used margarine instead of butter, (yes no butter, but simple "PLANTA") added a cup of freshly squeezed coconut milk, freshly grated coconut and pandan juice. The taste- is simply marvellous, you can just eat pieces of the cake without stopping. Yes, that is why we need to use natural and traditional ingredients in cakes, it is simple but yet it has made its own mark. So, the next time if I ever come across coconut milk and pandan leaves, I will definitely visualise hot steaming pandan cake and a cup of hot black coffee. Yes, love is having simple pleasures in life , that is your own home made cakes. ;)

Posted by nizaineese at 4:51 AM No comments: 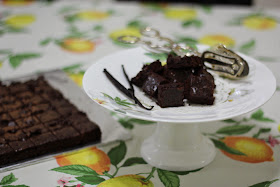 Baking is a bliss

nizaineese
An ordinary mum who likes to bake and trying to balance the world on her feets....

My Friends and Alike

Especially when you have loved ones in mind...and take efforts to bake for them

The Beauty of Baking

It Makes Your Heart Go Wild...

With Pure Choc Brownies To Make You Happy

Cupcakes Light Up Your Life

Whenever they are pleasing to the eyes

I Am Happy, Stress-Free

I'm here just to share the joy of baking cupcakes and other baking delights...